To Spay or Not

Jump to Latest Follow
i’m having a dilemma which might be common sense to some people but I’m having a rough time. I’ve had three male golden retrievers, all neutered, all died of cancer related illnesses. Now I decided not to neuter a male that I have and he is six years old. I read that he would have more of a chance of fighting cancers if I left him intact. I also have a female, and she is about a year and a half old and also intact. Her first season came and went without much trouble but her second one was awful as my male was constantly after her and keeping them separated was difficult. The reason I left my female intact was because I read that I should give her two years to develop and get all of her hormones before I spay her, and then it would be a good idea to do that to avoid the chance of getting pyometra. Although she only has six months to go to the two-year mark, I don’t know if I can handle another cycle with her and my male going crazy. I have also read that I should allow her to have a litter of puppies before spaying her and it would be beneficial, but with all the unwanted dogs and especially now with the recession we are in I hate to bring more puppies into this world. My dilemma is what to do. Should I wait until a full two years, spay her now, or allow her to have a litter before I spay her? I know I’m being a little silly but my female is only about 53 pounds and she is very small and petite and still a baby to me. The thought of doing such an invasive surgery on her at this point is scary to me. What should I do?
Save Share
Reply Quote
1 - 7 of 7 Posts

Hal said:
I have also read that I should allow her to have a litter of puppies before spaying her and it would be beneficial,
Click to expand...

I don't know what nonsense told you that, but super, super wrong. 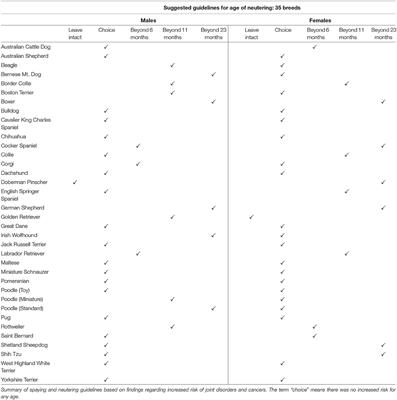 Neutering (including spaying) of male and female dogs in the first year after birth has become routine in the U.S. and much of Europe, but recent research reveals that for some dog breeds, neutering may be associated with increased risks of debilitating joint disorders and some cancers...

· Registered
Joined 21 d ago
·
3 Posts
Thanks for your responses.
P

· Registered
Joined Aug 5, 2017
·
820 Posts
One of the vet, I try to follow on Insta is @drjudymorgan. I try to keep up with different vets who have also controversial ideas on pet health. We shall listen to all of them. I am not sure if I will make it but Dr.Judy Morgan has a live at 3PM EST on spaying& inconsistency & different methods of spaying.
Unfortunately & fortunately, I live in a multidog household and with the rescued added, I do not have the luxury of keeping a dog intact / unspayed. However, it is always useful to listen to multiple opinions.
Personally, I never encountered any health problem with any of the spayed / neutered dogs of mine & rescue dogs. One of my dog though at aga 14,5-15 years old got stump pyometra. We were dealing in her last 2 months with multiple issues and stump pyometra was one of them. She was spayed when she was 6 months old.

· Registered
Joined Aug 20, 2010
·
5,065 Posts
I’m keeping my male intact due to the studies regarding increased cancer and joint issues — and past experience with my last male Golden getting both joint issues and cancer which led to an early death. I have not owned a female Golden Retriever. I would not breed puppies unless I was an educated and ethical breeder who has done all the recommended health tests. I have a female Cavalier King Charles who is spayed. My male Golden is still occasionally interested in her womanly wiles. There’s no chance of a pregnancy though. You have to decide if you want to police two intact opposite sex dogs.