Joined Aug 20, 2010
·
3,341 Posts
I've kept a thread over in the Golden Retriever Puppies up to One Year section until today because Logan is now a year old! We'll update this thread with photos of Logan's adventures.

Happy birthday to my sweet boy. It took him a second to warm up to the silly misshapen hat.

Thank you! My husband thinks I'm crazy today. I told him we are about to go on his birthday walk and Logan has one small cowlick. I'm going on about using my hair oil on it.

Logan has gone to two classes at the local obedience club in Columbia now (private -- they're doing a pilot program and we have one more. They are starting something more structured beginning in January.)

He has also gone to two classes in pre-agility foundations.

Both the instructors are super nice and I know Logan needs a good obedience foundation to do agility. The agility instructor said she thinks rally is more fun for the dogs -- out of obedience and rally. I guess we will see. I'm reading The Beginner's Guide to Dog Agility to edify my mostly clueless mind.

In the last agility class he took off and ran like the wind around the perimeter of the agility course four times. Once he settled, he went through the tunnel from different angles, we started learning front cross overs, and worked on some restrained recalls with him coming to either side of me. If I call any of this by the incorrect terms, feel free to correct or bear with me.

In the last obedience class, the instructor was giving a long talk on what shaping is. Logan let out an exaggerated sigh sometime during it and plopped to the floor. A few minutes later, Logan stood up and did a perfect roll over and back to his feet. In that class, we worked on shaping around a brick object and I didn't realize the man was working him up to paws up. When he said, "Eventually, we will work Logan to putting both paws up on the brick," Logan immediately put his paws on the brick because he heard the words. He knows that one already. We also worked on impulse control with Logan leaving treats we walked up to that were in a chair.

One thing Logan is doing, and I want to correct, is he's casting his bottom off to the side instead of being straight beside me in heel position. That's my fault (usually is) because he started it and I didn't know how to start correcting it. We're working on fixing that.

I didn't know they extended the virtual novice rally pilot to 2021. I think I will try that. 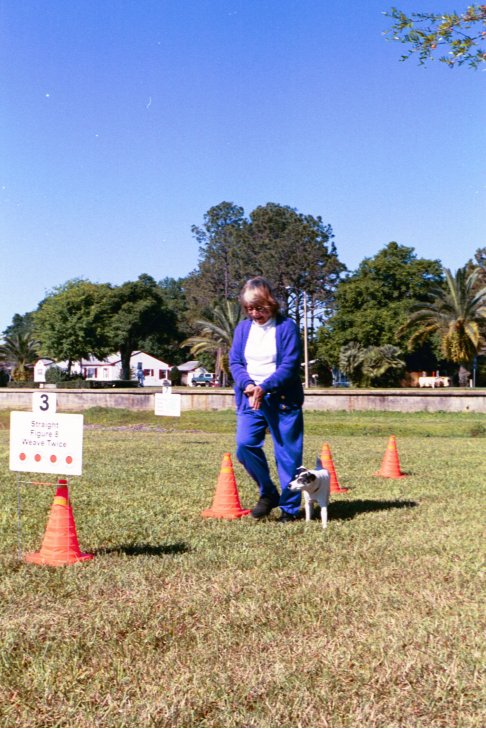 Logan got his TKI today! Yay! He's such a good boy. I'll attach a few videos of tricks from his list.

Logan is heeling much more consistently lately when we walk and that makes me happy.

He has one more class at the obedience club tonight and then they break until January and they'll set up some classes (hopefully.) We've just been working on getting him into proper heel position (without his bottom being cattywampas when he sits) and impulse control. He's good about leaving treats in a chair because he knows I'm going to give him one for doing it.

I found him a new lady to start basic obedience in January (a group class) and then once we take it, we can take advanced (hopefully) and she does CGC testing. I talked to her and she's very nice. Her classes stay full a lot. I had just checked last week and they were full, but she put up her new session and I was able to nab one.

I signed up for a Denise Fenzi course online to work on his greeting skills.

Place from at least 10 feet (no idea why I put my finger by my nose. Looks like a Bewitched moment. haha):

We are still weaving. My sister said if he gets any taller, I'm going to go down. lol Pardon my pool deck -- we had a hellacious storm the night before:

Fetch and bring the ball to my hand:

Joined Aug 20, 2010
·
3,341 Posts
It's bright and beautiful today, so we took a nice long walk in perfect temperatures. We also took time out to stop and sniff, plus we went on the tennis courts to retrieve a left behind ball. I'll end up on Nextdoor for breaking the rules. 🤪

Later we are going to work on two on two off and doing figure 8's (front cross work) with two cones. Perhaps a few other things. I can't bring myself to start practicing for advanced trick dog stuff yet. He already will sit at a distance, so that's good. Maybe I'll do two handler's choices. I wonder if stringing a few agility obstacles together would count?

Anyhoo -- Logan is a pretty strike a pose dog, so here he is:

Joined Aug 20, 2010
·
3,341 Posts
It's raining this morning. Not that it matters because I get this within 15 minutes of waking up/getting my coffee. I play with a toy with him while my coffee is brewing and then I just need one cup. This is what Logan thinks of me having it. lol

He's the best and I'm getting in better shape -- we are walking 4 to 6 miles each day, he loves his Chuck-It ball and launcher, is doing great with the latest -- figure eights around cones -- wrap from the left/wrap from the right -- and 2/on 2/off/target -- he was doing it well walking, so I've moved him up to a faster pace, and restrained recall where he goes to my left or to my right, depending on which way I'm turned halfway towards.

granite7 said:
I love that face! It is as if he can speed up your cup with his expression of love.
Click to expand...

He's pretty successful at moving me along. lol He loves to prop his chin on the sofa, coffee table, my thigh, dad's recliner arm... I laughed when his obedience instructor asked if he knew the "chin" command. He does put his chin in my palm on command, but he's really diversified his talent in this area.

granite7 said:
So cute! I didn’t realize there was a “chin” command. This is what Bella does...

OscarsDad said:
He doesn't look the least bit tired. What a face!
Click to expand...

Joined Aug 20, 2010
·
3,341 Posts
I tried Luke’s harness on Logan today and it fit. We gave it a test drive and Logan approved. I ordered Logan one as I want to save Luke’s. I will still use Logan’s flat collar for training.

He’s so handsome and sweet.

OscarsDad said:
He has a million dollar smile. Looks so cuddleable!
Click to expand...

Thank you. Budweiser was doing a good job of making people smile for a minute on Twitter. People need some cheering up. Logan's smile surely helps!

granite7 said:
Logan has such a handsome face!
Click to expand...

Thank you! My agility instructor took a photo of him to share with her Golden Retriever loving friend. She thinks Logan is good looking.

granite7 said:
That is a good idea! He looks old enough to maybe have seen them last year. How did he do?

Little Cody is doing well around stuff like that. He seems very confident in his walks, both alone and when with Bella.
Click to expand...

Logan just turned one on 11/29, so last year he was still with his canine mother and breeder to celebrate Christmas.

He doesn't seem fazed by the inflatables. Nothing much seems to put Logan in fear mode. That's my daughter's yard (she lives in the same neighborhood as us), so I think he was more interested in seeing my three grandchildren. He loves them.

My neighbor a couple of houses down put in an 18' Frosty the Snowman and the motor makes some noise, so he noticed it, but he was looking at it like "What the heck is that?!" -- not really scared. lol